The untapped potential of the pepper plant

Pepper is one of the most regularly used condiments in the world but researchers believe we’re just scratching the surface of its uses.

In a review, as reported in the article ”Piper genus has huge untapped potential, researchers say” by NutraIngredients, researchers assessed the bioactive compounds of 106 species of pepper or “piper”. This includes a number of already well known plants with bioactive compounds within the piper genus (plant group) such as piperine from black pepper (Piper nigrum), chavibetol from betel leaf (Piper betle) and methysticin from kava root (Piper methysticum).

Researchers believe that, in addition to their anti-inflammatory properties, the plants could also be used as food safety additives due to their anti-proliferative and anti-oxidant properties.

A new article called “12 Healthy Ancient Grains”by Healthline has listed some of the potential health benefits of some ancient grains in order to get people to reconsider the grains they include in their diet.

-          Amaranth, a gluten-free grain that is a good source of manganese and magnesium

-          Millet, known best as a birdseed ingredient, millet is actually very popular in China, India and Africa and is nutrient dense and gluten-free

-          Khorasan wheat (kamut), while containing gluten, this grain offers 100% of your daily selenium and 30% of the daily fibre requirement

-          Sorghum, gluten-free and a good source of polyphenol plant compounds, which act as antioxidants in the body

-          Teff, despite being much smaller than other grains, teff is high in copper, vitamin C and manganese

-          Freekeh, as a Middle Eastern staple, freekeh has become more popular on supermarket shelves whilst also acting as a good source of the carotenoids lutein and zeaxanthin

-          Farro, high in antioxidants like polyphenols, carotenoids and phytosterols, as well as protein and fibre, farro is a bit of a supergrain despite containing gluten

-          Barley, one of the better-known grains on the list, barley is high in beta glucans, which is a type of soluble fibre

-          Quinoa, already a popular gluten-free grain but not many people know that quinoa is also high in protein and potent antioxidants such as quercetin and kaempferol

-          Rye, compared to wheat it provides fewer carbs, more vitamins and minerals and is high in fibre 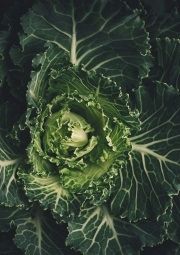 -          Fonio, a type of millet popular in West Africa, that is gluten-free and a good source of magnesium, copper and zinc.

The nutritional benefits of cabbage vs lettuce

Despite looking alike, the health benefits of cabbage and lettuce are vastly different. The article ”Cabbage vs. Lettuce: What’s the Difference?” by Healthline explains some of the potential benefits of both.

Despite cabbage being higher in calories and carbs, it actually has three times the amount of fibre and gives 61% of the recommended amount of vitamin C compared to lettuce’s 5%. Lettuce, however offers more vitamin A than cabbage.

The article compares just green cabbage and iceburg lettuce, not any other varieties, so it is worth keeping this in mind when making your choice between the two come dinner time.