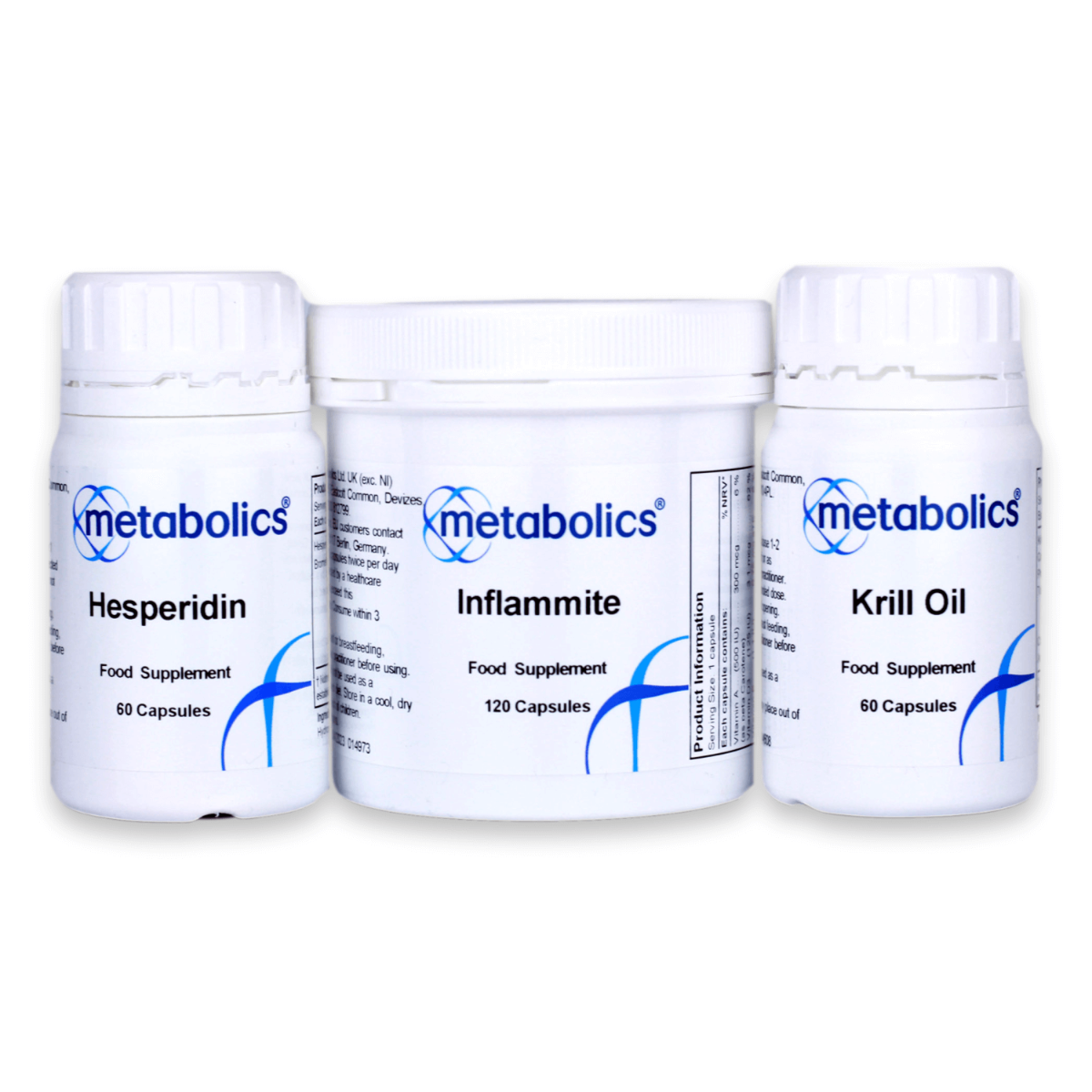 The Hay Fever Support Bundle has been designed to provide the best nutritional support for the body’s inflammatory response that can occur in the response to pollen.

Suitable for vegetarians: No

Suitable for vegans: No

What is the Hay Fever Support Bundle?

The Hay Fever Support Bundle has been designed to provide well-rounded support for the body’s inflammatory response to pollen.

It consists of the following products:

Metabolics Inflammite is a multi-ingredient anti-inflammatory product designed to give you good nutritional support so the body can provide the best inflammatory response when it is exposed to pollen.

Inflammation is the first response of the immune system in reaction to infection or irritation. This happens as the body is attempting to heal itself and usually takes the form of redness, heat, swelling and pain. In hay fever specifically, signs of inflammation manifest themselves as red and/or itchy eyes, inflamed nose, and headaches.

Some inflammation initially, known as acute inflammation, is beneficial but it can result in further inflammation that can become chronic. Chronic inflammation can be more damaging and last for months or even years leading to underlying illnesses and damage to the body. Histamine is released when the body mistakes a harmless allergen ie pollen as a potential threat. This leads to the classic hay fever symptoms of puffy eyes, congestion and itching.

Metabolics Inflammite supports the body in its inflammatory response against pollen allergies by containing ingredients that support the normal function of the immune system. These ingredients include vitamin B6, vitamin C, vitamin D3 and vitamin A in the form of Beta Carotene.

It also includes magnesium, which plays an important role in cell division, including cells of the immune system, and vitamin E, which contributes to the protection of DNA, proteins and lipids from oxidative damage.

Other ingredients in Metabolics Inflammite include turmeric, quercetin, astaxanthin, resveratrol, marine pine bark and zeaxanthin; all powerful antioxidants that studies show support the body in its inflammatory response. Quercetin is included in Inflammite as a powerful antioxidant that has reported antihistamine effects, as reported in this Quercetin study, but you may need a stronger dose than what is in this product, in which case you can take Quercetin separately in addition to this Hay Fever Support Bundle.

Olive leaf, included in this product, contains an important compound known as oleuropeins, which contributes to the protection of blood lipids from oxidative stress.

Vitamin K2 is included due to the inclusion of vitamin D3 as it is recommended to take vitamin k2 with vitamin D because vitamin K2 is needed for a bone hormone called Osteocalcin, which takes the calcium to the bones. D3 on its own increases calcium in the blood, whereas the K2 helps deposit calcium into the bones.

The production of a number of chemical markers and mediators is a result of the inflammatory response. Metabolics always recommends taking a Metabolics high quality omega 3 or krill oil as an accompanying supplement to protect the cell walls from damage caused by the inflammatory chemicals.

Fish oils contain Omega 3 fatty acids, which are part of a healthy diet that is associated with lower levels of inflammation. The body cannot manufacture Omega 3 fatty acids so it is important to get them through a nutritional source.

Krill Oil is the most bioavailable source of Omega 3, offering a unique composition of eicosapentaenoic acid (EPA) and docosahexaenoic acid (DHA) mostly carried on phospholipids, whereas with fish oil it is carried on fatty acids, and esterified astaxanthin. Krill oil consumption can support the right balance of the omega 3 and omega 6 fatty acids, something that is often out of balance in western diets, which can support the immune system and inflammatory response.

Overall, both Omega 3 and Krill Oil are great sources of Omega 3 fatty acids.

Hesperidin is a natural flavone glycoside, which is a flavonoid antioxidant found in unripe citrus fruits, mostly oranges. 5-10 % of the weight of tangerines, after drying the fruit for 5-7 days, is hesperidin. It is thought that plants produce hesperidin as a defence mechanism against Phytophthora citrophthora, which is a brown rot, a type of water mould.

There are studies that show hesperidin to suppress histamine release in some types of allergic reaction (via its metabolite, hesperitin). It is also thought to hold anti-inflammatory properties.

Metabolics Hesperidin contains bromelain in addition to hesperidin. Bromelain, found in pineapple, is thought to offer relief of nasal and sinus inflammation, which could support the body against feelings of nasal congestion and runny nose associated with hay fever.

If pregnant, breast feeding consult your health care practitioner before using. Not suitable for vegans. This product should not be used as a substitute for a varied diet.

If pregnant or breast feeding, consult your health care practitioner before using. This product should not be used as a substitute for a varied diet.

If pregnant or breast feeding, consult your healthcare practitioner before using. This product should not be used as a substitute for a varied diet.