Metabolics is proud to announce our new Vitamin B Complex liquid. This is unparalleled in its composition, supplying the highest quality B vitamins all in the most bioavailable, coenzyme forms. This means that they are in forms that the body can absorb readily and be directly utilised by the body without requiring conversion in the enterocytes or the liver before being released into the general circulation.

Most nutritional supplement companies’ use the cheaper forms of vitamins, in particular the B vitamins that need to be converted to their active coenzymes.

What's In Our Vitamin B Complex?

Below is a comprehensive list of all the B Vitamins you'll find in our new Vitamin B Complex. 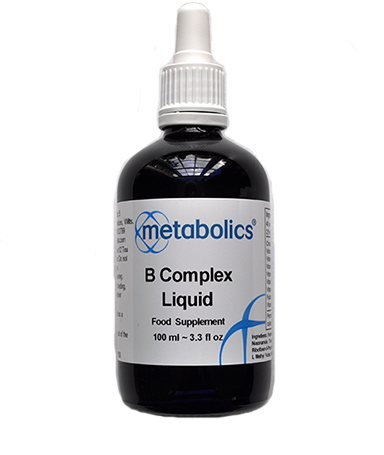 Vitamin B6 as pyridoxine hydrochloride is the most commonly used form of vitamin B6 in nutritional supplements. It is not naturally found in foods and needs to be converted to the active coenzyme form P-5-P in the enterocytes and liver, to be useable in the body.

If liver function is impaired, enzyme defects exist or there are nutritional inadequacies then conversion from Pyridoxine Hydrochloride to P5P may be impaired. In addition certain medications can impair this conversion pathway. Only P5P has an active coenzyme function in the body, playing an important role in over 100 different pathways involved with neurotransmitter production, amino acid metabolism and other metabolic reactions. P-5-P is ‘active’ and does not require further conversion by the body.

Although both pyridoxine and P5 P appear to be absorbed well in the intestines research has demonstrated that P5P is used preferentially when there are metabolic or physiologic abnormalities. In addition high doses of pyridoxine are known to cause sensory neuropathies. Doses as low as 200mg of pyridoxine have been associated with toxicities. Contrastingly no neuropathic symptoms have been reported with daily doses of P-5-P up to 750 mg for 30 days. It is thought that high levels of pyridoxine exceed the ability of the liver to convert to P5P, leaving excess levels of unconverted pyridoxine that may be directly or indirectly toxic to nervous tissue.

Vitamin B2 is usually sold as Riboflavin by most companies, however needs to be converted in the body to its active coenzyme form Riboflavin 5 Phosphate (R5P). It is then converted further to Flavin Adenine Dinucleotide (FAD). In addition to the other functions of Vitamin B2, R5P is needed for the activation of other vitamins and enzyme systems. R5P is synthesised from Riboflavin in the mitochondria so adequate conversion is dependent of effective mitochondrial function.

R5P is necessary for function in the respiratory chain and in B6 metabolism to Pyridoxal 5 Phosphate. It is also needed for the conversion of tryptophan to niacin.FAD is needed in the Krebs cycle, fatty acid oxidation, energy metabolism, metabolism of neurotransmitters, the formation of methyltetrahydrofolate from folate , purine catabolism and as a cofactor for Glutathione reductase. Both P5P and FAD take part in oxidative phosphorylation at a cellular level enabling them to carry out oxidation and reduction reactions important in reactions involving fats, carbohydrates, amino acids and the electron transport chain.

Vitamin B2 is easily absorbed from the upper part of the small intestine and parts of the large intestine (where it can be synthesised )into the blood which transports it to the tissues where it is converted to its bioactive forms. Synthesis of P5P and FAD are regulated by ACTH, Aldosterone and thyroxine.

Vitamin B1 Thiamine is also necessary for the synthesis of the neurotransmitters Acetylcholine and GABA.

Vitamin B3 is used in the form Niacinamide rather than Niacin as this form may cause gastrointestinal upset or liver toxicity. Synthetic niacin is produced in a process involving formaldehyde and ammonia.

Niacinamide is absorbed in the small intestine and present in blood plasma. It is converted to the coenzyme forms NAD and NADP, in the kidney, brain, liver and red blood cells . Niacin converts to NAD and NADP half as readily as Niacinamide and supplementation with Niacinamide is an effective way to increase intracellular NAD levels.

Vitamin B5 is pantothenic acid. Only D pantothenic acid possesses biological activity. Usually B5 is used in the form of Calcium pantothenate as pantothenic acid can be unstable in acid or alkali conditions however the calcium salt reacts with other ingredients in the Vitamin B Complex liquid so a liquid form, Dexpanthenol is used. The most active form of Vitamin B5 is a disulphide form of pantothenic acid, pantethine. It contains the sulphydryl group needed for biological activity in Coenzyme A. However pantethine liquid is a viscous oily liquid that does not mix easily with the other liquid B vitamins and for this reason Dexpantethenol is used in liquid vitamin B Complex.

Folate Metabolics uses Methyltetrahydrofolate, the active form of folic acid. Folic acid needs to be converted (methylated ) in the intestines and liver to form 5- methyltetrahydrofolate which is found in the blood and utilised in the tissues. As 60% of people have a genetic enzyme defect preventing them from being able to make this conversion, folic acid in supplements would be ineffective. Most supplement companies choose folic acid not folate as it is a far less expensive material.

Both methylcobalamin and adenosycobalamin are the form of B12 that can be utilised by the cells most effectively.

Vitamin B12 is absorbed only in the ileum and because the number of specific receptor sites in the ileum is restricted, only tiny amounts can be absorbed.

Biotin (Vitamin B7) is included for its importance in the nervous system and psychological function, macronutrient metabolism, and the maintenance of normal hair, mucus membranes and skin. It occurs in only one form with high bioavailability being completely absorbed.

Choline is used in this formulation in the form of choline chloride, a soluble form of choline to contribute towards the synthesis of phospholipids. Choline is also a precursor of intracellular messenger molecules, acetylcholine and a methyl group donor.

If you have any specific questions about our new Vitamin B Complex please feel free to leave a comment below in the comments box.