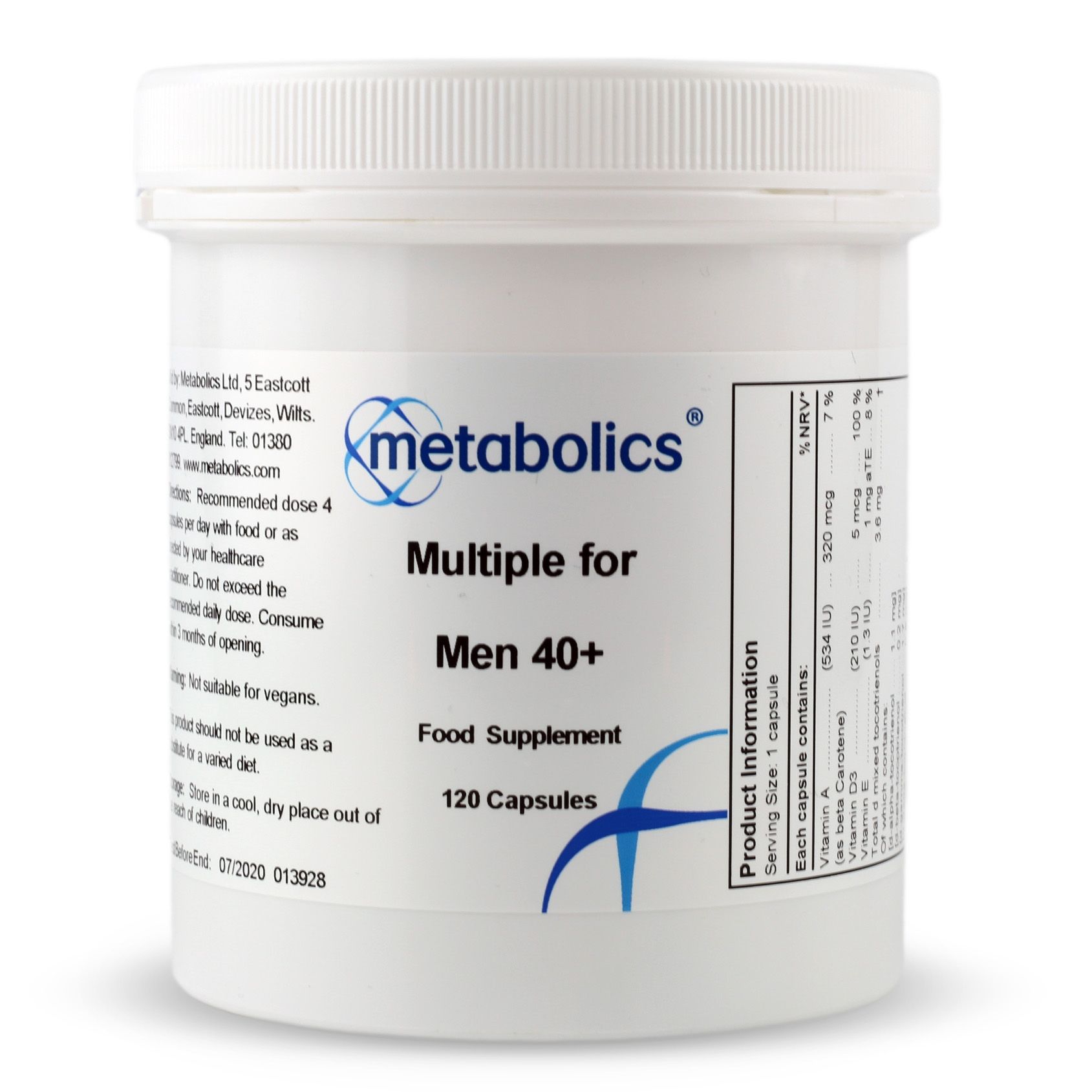 These multivitamin/mineral supplements have been formulated to achieve a balance of safety and therapeutic value for long-term supplementation.

Metabolics use a wide range of powerful carotenoids, which do not usually appear in MVM (multivitamin/mineral) formulations, namely Zeaxanthin, Astaxanthin and Lutein.

Metabolics is unique in including Astaxanthin as part of a multivitamin/mineral supplement as it has such an important antioxidant qualities. It is incredibly powerful, being up to 500x more powerful than vitamin E and at least 1000x stronger than Vitamin C.  Astaxanthin is also very beneficial as it has the ability to stabilise vitamin E. If sufficient amounts of vitamin E lie around in the body underutilised they can actually convert to a pro oxidant and dangerous form. Vitamin C is not only included for its antioxidant support but also for support of the immune system, collagen tissues, energy production and normal nervous system and psychological function.

For example D3 is always paired with K2

Vitamin D is needed for regulating over 2000 genes in the body and is vital for the absorption of calcium and maintaining normal blood calcium levels and maintaining healthy bones and teeth. Vitamin D is also needed to help keep a healthy immune system and normal muscle activity

Vitamin K2 contributes to the maintenance of normal bones

Zinc is always paired with Copper as long-term use of Zinc can lead to a Copper deficiency.

Zinc is important for normal DNA synthesis, fertility and reproduction. It is also needed for carbohydrate, fatty acid and protein metabolism along with contributing to cognitive support and healthy bones.

Calcium and Magnesium is included in the optimum 2:1 ratio.

Calcium is important for numerous health functions including normal energy yielding metabolism, nerve and muscle function. It is needed for normal bones and teeth, contributing to normal blood clotting and normal function of digestive enzymes.

Magnesium is essential for over 300 enzymes in the body. It is necessary in every cell in the body to bind with ATP to produce energy. Lack of Magnesium may result in tiredness and fatigue. It is needed for normal nerve transmission, muscle function including heart muscle. It is important for protein synthesis in the body, including muscle.

Selenium is vitally important as an essential mineral protecting cells from oxidative stress and contributing to normal immune and thyroid function. Selenium is particularly important for men as it contributes to normal spermatogenesis.

Betaine has been included in this male support formula as it has 3 chemically reactive methyl groups that can act as methyl donors. Betaine along with Vitamin B6 and B12 can act as methyl donors in the remethylation of homocysteine in the liver contributing to the breakdown of this dangerous chemical. Increased blood levels of homocysteine can damage cholesterol, leading to damage of artery walls. Betaine is an important daily requirement as homocysteine values rise as we age, levels of which are typically higher in men.

Supplemental glutamine has been shown to enhance acid secretion and increase kidney filtration rate in the kidney. Receptors for growth hormone (HGH) are present in the kidney and increased filtration rate could explain the increased growth hormone that results from glutamine supplementation. An oral glutamine load enhances renal acid secretion and function by Wellbourne, Clayville and Langford Published American Journal of Clinical Nutrition. Glutamine is also the most prevalent amino acid in muscle and so is important in sustaining decreasing muscle mass as we get older.

Alpha lipoic acid is naturally found in the mitochondria (energy producing machinery of cells). Experiments in mice have shown that Alpha lipoic acid, acting as an antioxidant reversed memory impairment and oxidative stress.

CoEnzyme Q 10 is a naturally occurring substance found in every cell in the body that can neutralise free radicals. It is involved in producing ATP (energy) High amounts are found in the heart, liver, kidneys and pancreas. The highest levels are seen in the first 20 years of life and after the age of 80 are less than they were at birth.

100%
"A trusted source of high quality vitamins and minerals that I have been taking for several years now."
Tim Mitchinson | Posted 6 months ago | Read full review

WARNING
Not suitable for vegans. This product should not be used as a substitute for a varied diet.