Gluten Sensitivity and Kryptopyrroluria two hidden conditions that can affect over 35% of your patients and really mess up your day. 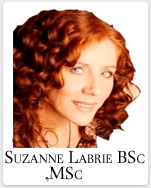 Suzanne Labrie BSc (Hons) MSc is the Director of Pure Health Solutions Clinic and Metabolics Australia and is a respected Chiropractor with more than 14 years experience using Applied Kinesiology in a clinical setting. She combines her knowledge of AK with other structural and emotional techniques, and nutritional supplements. With a background in biochemistry, pharmacology and marketing, she is passionate about holistic therapies.

Gluten sensitivity (GS) is an autoimmune condition (i.e NOT just allergy) caused by a gene which is present in 35% of Caucasians. It is a completely separate condition from celiac disease in that it affects connective tissue everywhere in the body, so can manifest as chronic joint pain, fibromyalgia, migraines and motor and sensory neuropathy for starters. In fact the New England Journal of medicine lists up to 55 diseases that can be caused by GS without most people even realising that the cause is gluten. (Farrell RJ, Kelly CP. Celiac sprue. N Engl J Med. 2002 Jan 17;346(3):180-8. Review.)

In addition, an estimated 99% of people who have a problem with eating gluten don’t realise it and ascribe their symptoms to something else which may not be as curable as just avoiding gluten. Some of the other, even worse manifestations are neurological and psychiatric problems due to the neurotoxicity of gluten, such as anxiety, depression, behavioural problems, dementia, epilepsy, bipolar, schizophrenia, and many other psychiatric illnesses. (Hyman, Dr Mark, Gluten what you don’t know might kill you, 17-3-11.)

There are many reasons for our general sensitivity to gluten, the prime one being that wheat was genetically modified in the 1960’s to double its gluten content. Originally wheat had 14 chromosomes for protein (or gluten) and only some of which caused inflammation, however the additional 14 which were added to code for the extra protein in wheat are all extremely inflammatory and for those people with genetic susceptibility to it the result can be disastrous. The two main triggers appear to be gut damage (either from chronic gut infections like giardia, or chronic antibiotics or anti-inflammatory drugs or a few other 21st century influences) and stress, (who do you know doesn’t have these things?) which activates the gene which then initiates an immune response. (Taken from Robert Kidd MD CM Neural Therapy Seminar 18-19/3/2009) Also Dr Mark Hyman “Three hidden ways gluten makes you fat” (and sick)

The second hidden problem is Kryptopyrroluria (KPU), a condition which can accelerate or trigger GS exponentially to make the situation even more complicated! KPU patients typically have major problems with digestion and absorption of nutrients, with subsequent chronic leaky gut problems, and also have a very low tolerance to stress (see conditions listed below). Gluten is already hard to digest for most people, and the autoimmune response is switched on by stress, so with both problems present you have a recipe for disaster! No wonder autistic children are so exquisitely sensitive to gluten.

Krytopyrroluria is a condition usually associated with autistic spectrum disorder, learning difficulties, bipolar disorder and schizophrenia. However there are many researchers (Ref as noted below) that now believe that there are milder forms of it which are very common in people with chronic illness.
KPU was first noted by Abram Hoffer MD, PhD and Humphrey Osmond, MRCS, DPM in the early 1960's, in their research into schizophrenia.
KPU is usually a genetic condition whereby the body cannot easily absorb vitamin B6 and zinc, excreting too much in the urine. In 1964, however Thompson and King reported that aside from acute and inherited conditions, there are milder constitutional forms caused by heavy metal contamination or chemical toxicity. (THOMPSON, R.H.S. and KING, E.J.: Biochemical Disorders in Human Disease, 2nd Edition, Academic Press Inc., 1964)
The milder forms can be responsible for the following.

Have increasing problems with fatigue without any apparent cause, however are prone to insomnia and constantly live on adrenaline
Have increasing problems with headaches, bowel dysfunction, poor memory and poor response to stress often with accompanying anxiety
Can’t cope with high pressure situations, becoming irritable and prone to outbursts of temper “Hit the wall” with their training regime without any apparent reason.

We are living in a world where heavy metal contamination is a way of life, whether it is eating too much tuna contaminated with mercury or leaky amalgam fillings or too many vaccinations putting high amounts of aluminium and mercury into the system. Chemical toxicity is also part and parcel of life in the western world. Therefore it is not unexpected that people are developing the symptoms of KPU which are noted above.
KPU can be detected with a urinary pyrrole test available through specialised pathology laboratories, which Chiropractors can request if they are registered with the lab as a provider. Otherwise any GP can refer them for the test.

Suggestions on how to treat the two conditions whether they occur separately or together.
For Gluten Sensitivity; the solution is obviously elimination of Gluten. There are a few good books out now which give patients some idea of how to go about it (“Gluten- free for dummies” is a good one). Most people are horrified but it is possible to do it and often essential.

Once their condition has stabilised then it is highly effective to start the use of special digestive enzymes to break down gluten deposits in the body, as due to the difficulty in digesting it, there are often pockets of gluten stored in all sorts of places mostly connective tissues, (worse when its neurological). As the gluten comes out of the body there is often a fungal response which needs to be dealt with using antifungal herbs. Often the hormonal system is affected and the patient’s thyroid and reproductive hormones should be monitored.

In addition the following amino acids are CRUCIAL to help stabilise the liver, both for Gluten Sensitivity and Kryptopyrroluria conditions: N-Acetyl Cysteine, Glutamine, Taurine, Cysteine, Acetyl Carnitine (neuroprotective), Selenomethionine.
For KPU; Deficiencies of vitamin B6 and zinc can have far reaching effects on the patient’s metabolism.

The active form of B6 (pyridoxal-5-phosphate or P-5-P) is significant in neurotransmitter synthesis, haemoglobin synthesis and function and gene expression. (Wikipedia). The resultant imbalance in neurotransmitters like noradrenaline, acetylcholine, GABA, serotonin and melatonin can cause the emotional responses noted above as well as fatigue and insomnia.

The solution for KPU is simple, which is to put large amounts of vitamin B6 and zinc back into the system.
It is important to get expert help with the amounts needed, as it can vary quite substantially from person to person, with sometimes quite large amounts being required (60-200mg each of Zinc and B6 daily, with the B6 usually in the active form of Pyridoxal-5-phosphate). It is also recommended to supplement with vitamin C, manganese and GLA (from evening primrose, borage and blackcurrant oil. (Dr Randy S Baker MD, Holistic Physician)
Also the amino acids as mentioned above are vital in keeping the patient on an emotionally even keel.

On the 2nd of February 2013 Suzie Labrie, director of Metabolics Australia will be carrying out a seminar at The Hilton Hotel, Gatwick on the subject of treating and diagnosing Kryptopyrroluria. Tickets are £75.00 including VAT and are available to buy online or please call +441380812799 to speak to one of our representatives. We look forward to seeing you there!