Wasabi has made its name as a love it or hate it vegetable, commonly accompanying Japanese meals, but it’s actually packed with many health benefits too, according to the article, “6 Promising Health Benefits of Wasabi” by Healthline.

The article suggests that the compounds that give wasabi its distinctly strong flavour, the isothiocyanates (ITCs), are also what could provide several health benefits. One such benefit is that wasabi extract has shown antibacterial effects against two of the most common bacteria that cause food poisoning, Escherichia coli O157:H7 and Staphylococcus aureus.

While the results of the cited Wasabi study look promising, more research is needed to fully determine the effects.

Are you getting enough glutathione in your diet?

Glutathione is an antioxidant that is actually found in a variety of natural sources including the human liver, where the body naturally produces the compound. According to this article by Medical News Today, our Glutathione levels naturally decrease as we age, as liver makes less of the antioxidant, but we can increase levels through nutrition and other natural processes.

-          Consuming dairy products that contain beta-casein, which have the potential to increase glutathione levels. Those that have an intolerance of dairy products from cows can consider goat and sheep products instead.

-          Eating whey protein. This is also present in dairy products and contains large quantities of cysteine, which one study showed could increase glutathione and decrease oxidative stress.

-          Exercise has also shown to be one way of increasing glutathione levels.

-          Glutathione can also be increased by supplementation with NAC, N Acetyl Cysteine - the precursor to glutathione, and Reduced glutathione itself. 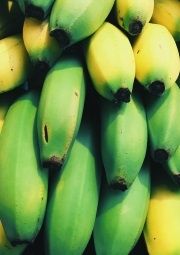 The potential health benefits of different types of bananas

It may surprise you to learn that there are over 1,000 different types of banana, including sweet and savoury varieties, but this article by Healthline, has looked at the health benefits of bananas and the differences between dessert bananas and cooking bananas specifically.

In general, bananas are widely known for their potassium content, which contributes to the normal function of the nervous system, muscle function and maintenance of normal blood pressure, but cooking bananas and dessert bananas actually contain different amounts of nutrients. Cooking bananas contain more potassium, at 14% the suggested daily amount compared to 10% per 100g in dessert bananas.

Overall, cooking bananas contain higher levels of nutrients than dessert bananas including vitamin C, which is double the amount, provitamin A, magnesium and fibre. However, dessert bananas beat cooking bananas on their vitamin B6 content, where the former contains 18% the recommended daily amount per 100g compared to the latter’s 15%.

Types of cooking bananas include Orinoco, Bluggoe, Fehi, Macho plantain and Rhino Horn, whereas dessert bananas are more commonly sold in the UK, with the Cavendish variety being the most popular.