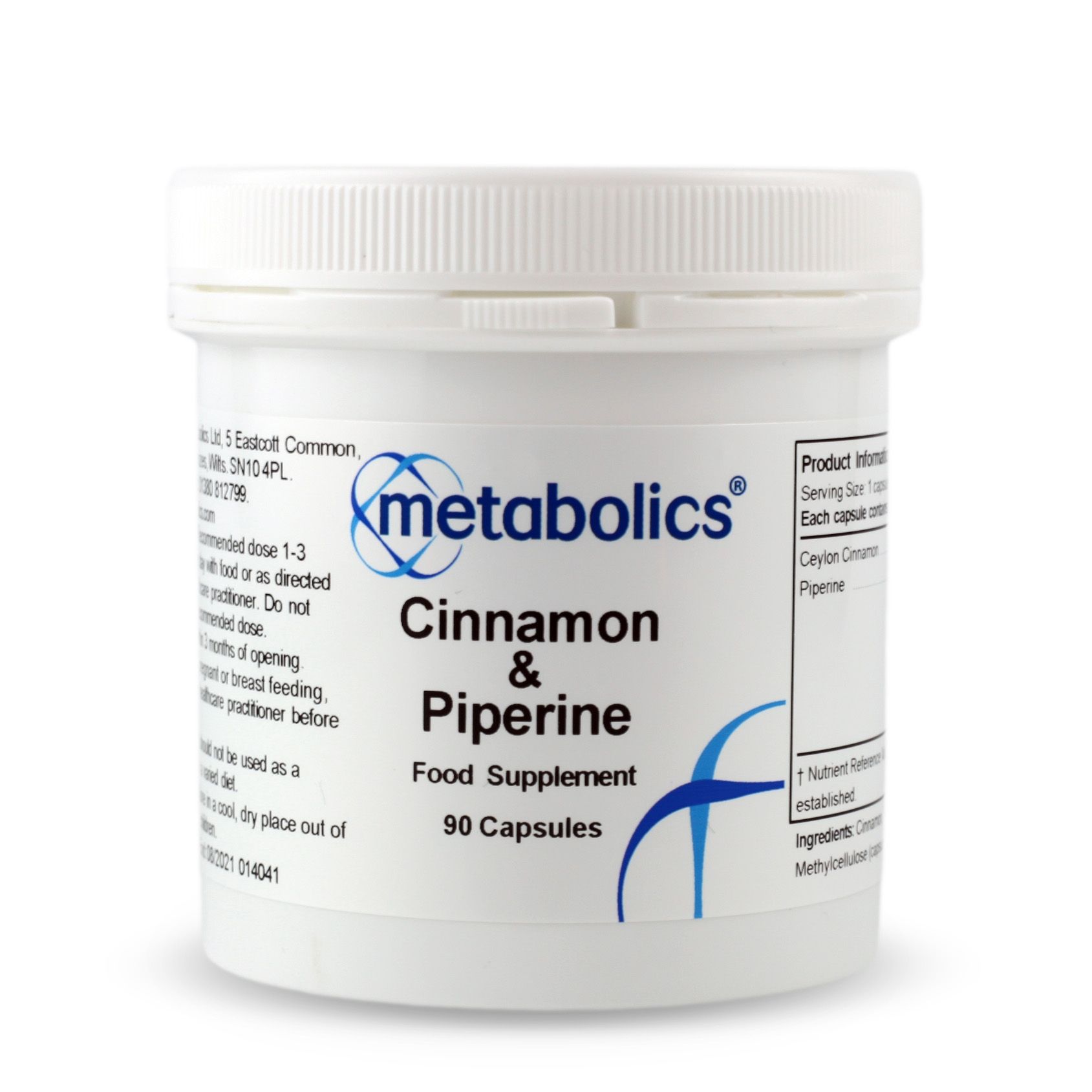 This product is now discontinued. Please see our anti-inflammatory supplements for alternative products.

Cinnamon is a good source of calcium, which is needed for the maintenance of normal bones and teeth and contributes to the normal function of digestive enzymes.

This product is now discontinued. Please see our anti-inflammatory supplements for alternative products.

What are Cinnamon and Piperine Capsules?

Piperine, found in black pepper, has been added to this formulation. It acts as a bio-availability enhancer by inhibiting some of the metabolising enzymes in the liver and stimulating amino acid transporters in the small intestine.

What are Cinnamon and Piperine Capsules good for?

Cinnamon is a good source of calcium, which is needed for the maintenance of normal bones and teeth and contributes to the normal function of digestive enzymes.

Metabolics Cinnamon and Piperine Capsules use the processed bark of Cinnamomum Zeylanicum as their source, which may help maintain healthy blood sugar levels and healthy weight.

Who is Cinnamon and Piperine for?

Metabolics Cinnamon and Piperine capsules contain 475mg of ceylon cinnamon per capsule as a convenient way of getting more cinnamon into your diet. This is beneficial for people where cinnamon, or Cinnamomum Zeylanicum, can be of benefit to their health in helping maintain healthy blood sugar levels.

According to Diabetes UK and the guidelines provided by the National Institute for Clinical Excellence (NICE), the recommended target blood glucose level ranges for a non-diabetic before meals is 4.0 to 5.9 mmol/L and under 7.8 mmol/L 90 minutes or more after meals. However, this is just general guidance and your healthcare practitioner should set your own tailored blood glucose levels targets.

It is important to maintain healthy blood glucose levels as high levels over a sustained period of time can eventually damage blood vessels, which can lead to a range of complications such as developing diabetes and cardiovascular, nephropathy, neuropathy and retinopathy diseases.

Why use Metabolics Cinnamon and Piperine Capsules

Metabolics uses Ceylon cinnamon, a fine, reddish brown powder taken from the thin inner bark of the tree. It contains only minimal amounts of coumarin, which acts as a pesticide for the plants that produce it but has recognised blood-thinning properties. Coumarin is found in much higher amounts in other varieties of cinnamon, such as cassia cinnamon.

Food supplements made to GMP standards.